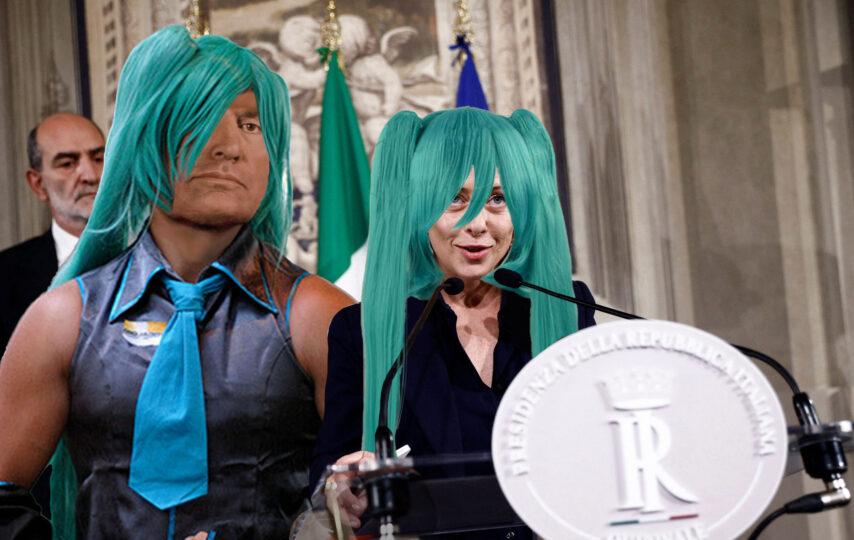 Last week, Giorgia Meloni, who was expected to become Italy’s first female prime minister, stepped down as head of the Brothers of Italy Party. Meloni made an appearance on the Italian TV network Non Notizie False, joined by what viewers described as “a hulking beast of gray skin and bulging muscles.”

“The second he came on screen, I knew who that sexy man was,” said Viviana Romano, a former newsstand operator. “I’ve bought a Mussolini calendar every year since my 18th birthday back in ’81. His face may be horribly disfigured, but I would recognize those defined pecs anywhere.”
Despite this sudden charge in leadership, the right-wing alliance still won a majority in parliament. Under Italian election laws, the head of the winning coalition becomes prime minister — in this case, the reanimated corpse of Benito Mussolini.

Many wonder where this gray behemoth came from. While there are no confirmed accounts of its creation, one dock worker reported seeing its entrance to the country. “It was crazy, bro,” said Nico di Simone. “I was inspecting this cargo ship coming in from Turkey, and I saw two guys walking next to this huge monster carrying cargo containers. You know those big colorful ones? He had like two of those on each shoulder. I asked the guys what they had there. They just said ‘cargo’ and walked away.”

Reports of this new Mussolini coming in from Turkey have sparked controversy among some Italian voters. The right wing alliance runs on a largely anti-immigration platform, and claims that Mussolini is now a Turkish immigrant have been the topic of debate. “I, for one, do not care,” said Isabella Palazzo. “This new guy has some very useful skills that the Italian people need. If there were a thousand reanimated Mussolini corpses, I would let in a thousand reanimated Mussolini corpses.”

Some right wing voters support Mussolini’s return for other reasons, claiming that his rule will bring stability and a return to traditional values. “Mussolini is like the father of this great land,” said Adelmo Ossining. “And Italy is his beautiful, supple wife. They are going to be joined once again in perfect union after so long apart, and we, the citizens of Italy, their 60 million children, are rejoicing.”

Outside of the Mussolini debate, many are wondering what happened to ousted party leader Giorgia Meloni. “I truly do not mind. I don’t care much for politics — fantasy is my first love,” said Meloni in a recent interview. “Conservativism is my second love, and my third love is the possibility of combining the two. I’ve always seen Lord of the Rings as a conservative allegory, and I would really like to explore that more. I see Sauron as a representation of big government, and Frodo as a rugged individualist fighting against the state.”

Meloni has begun a new venture explaining her conservative reading of Tolkien’s classic work on Twitch, a livestreaming site. She has become what is known as a “VTuber.” Instead of showing her face, Meloni’s voice comes out of a self-made “anime-style” avatar that she controls using a special program. Her livestream has surged up to 500 average viewers, and people have dubbed her the “Dark Lord of Twitch.”

After his election, Mussolini gave a historic speech at the Italian parliament building in Rome. Many tried to attend the speech in person, but not all were able to make it. Gerardo Arosio, a staunch Mussolini supporter, said, “I really wanted to see Mussolini’s historic speech, but my train was an hour late.”