Professor Branches Out to Streaming Professionally After Lecture Recordings Succeed 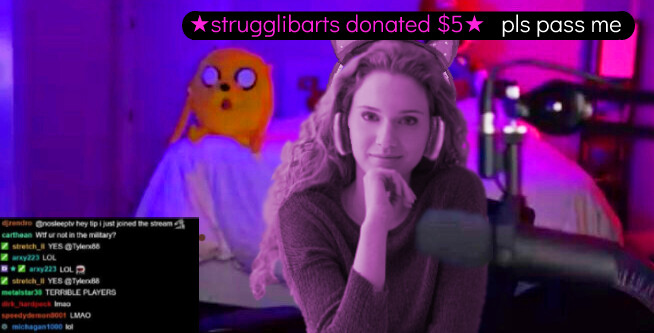 “I got banned from Twitch chat,” alleged one student. “Can I still pass the class?”
Photo by Amit Roth

The COVID-19 pandemic forced many aspects of modern society to quickly adapt to life online. Popular UC San Diego Professor Edith Streem stated, “From work meetings to Netflix watch parties, technology has undoubtedly become even more important in modern living. While this drastic and rapid shift expedited personal struggles for many, for me, it was the game changer of my career.” Professor Streem, better known by her Twitch handle GAME_OR_DIE.phd, is listed on the 2023 edition of Forbes’ annual Up-And-Coming Twitch Streamers. Prior to her success on Twitch and YouTube Live, Professor Streem’s streaming career began with her recorded lecture videos for her remedial “Intro to Theoretical Quantum Neurocellularscience for Non-STEM Majors” course. The transition from lecturing to streaming began with a “happy coincidence:” Professor Streem, a self-described “lifelong gamer,” was discovered in a Fortnite lobby by a Twitch talent scout, Nolan Anushka — coincidentally, one of her former students. Anushka said he “recognized her voice and iconically versatile use of obscenity while trash-talking in the lobby, and immediately private messaged her on Discord,” setting into motion the birth of an “internet star.”

Viewers of Professor Streem, self-proclaimed “phans,” say that Professor Streem’s “humor” and “gratuitous use of modern internet lingo” set her apart from other automated lecture recordings they have watched in place of going to in-person lectures. When asked about the origin of her unique fanbase name, Streem responded “Well, they did it themselves really. ‘Phan’ is just the word ‘fan’ but with a ‘ph’ instead of an ‘f,’ because — well, you know. I have a Ph.D.” Professor Streem explained the intentionality behind this name, as it allows “phans” to identify each other discreetly, so that “those who know, know, and those who don’t, don’t.”

Yulia Germana, a senior in Muir College majoring in Undeclared (Humanities/Arts), shared that Professor Streem “really cares about her students. she totally gets that sometimes going to in-person class isn’t vibes. she slays tbh. Sent from my iPhone.”

Currently, the professor is doing a run of Resident Evil 8, streaming every Monday, Wednesday, and Friday, with Sunday streams reserved for the winner of the weekly Twitter poll. This upcoming Sunday, the game of the week is Valorant, but historical fan favorites include Grand Theft Auto, Minecraft, and Among Us, where she was once a special guest on a collaborative livestream with other famous creators such as Corpse Husband, Jacksepticeye, and PewDiePie.

The professor plans to expand her online presence to TikTok within the coming month, and “phans” are even speculating on the existence of an “OnlyDoc,” though Professor Streem has yet to comment on the validity of this rumor.