ITS Announces Hiring of Carrier Pigeons to Improve ResNet Speeds 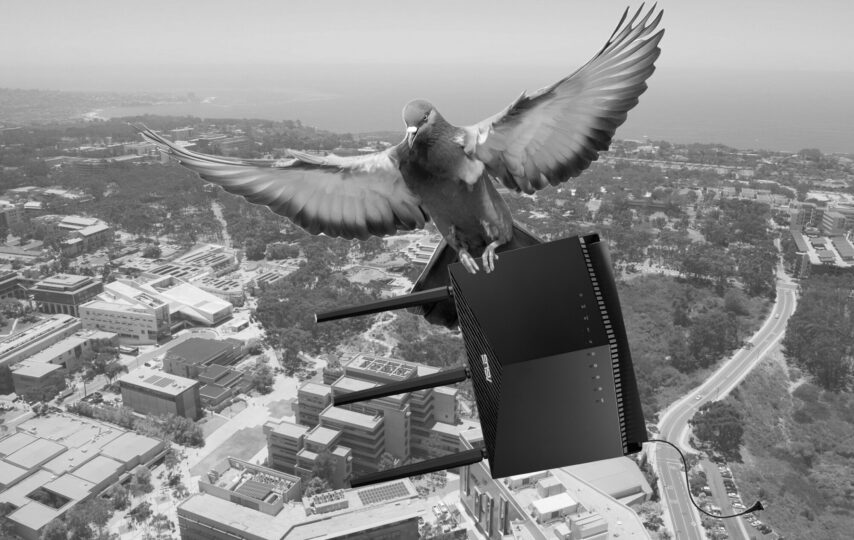 “My carrier pigeon isn’t helping at all. It built a ResNest in my dorm!” exclaimed one student.
Photo by James Woolley

In response to growing complaints, UCSD’s Information Technology Services department recently announced their new “Wi-Fly Initiative,” in which they will be hiring a squad of 10 carrier pigeons who will become responsible for a majority portion of the university network’s bandwidth.

Last week, Chris Pechicken, director of ITS and self-proclaimed “unquestionable technology wizard,” announced the program and provided information on what to expect, saying “it’s not the worst idea we’ve ever had.” According to Pechicken, “These pigeons will act as both an enhancement to the current network and as a layer of redundancy in the event of wildly unpreventable equipment failures. Instead of unpredictable computer equipment that never does what you tell it to, these trained animals should have no downtime and behave nearly 100% of the time.” Approximately 80% of the existing network infrastructure will be dismantled because “these 10 pigeons are about seven times as fast as the existing university network, and frankly, not getting rid of anything would make it just a bit too fast.” The carrier pigeons will be primarily flying between residential areas and the main ITS facility on campus. Of the team of 10, there will be one pigeon per college, with three reserved for “unexpected situations.” Each building will have a student worker who will rapidly transcribe network traffic onto small slips of paper and hand them off to the pigeons. Applications for this position will be available on Handshake in the coming weeks, with a starting pay of $15.02 an hour.

When asked about potential impacts to daily life on campus, Pechicken noted that “some changes may require time to get used to.” In order for the pigeons to have humane accommodations for their state-mandated hour of rest and recreation, Fallen Star will be turned into a birdhouse and filled with leftover bread products from dining hall trash cans.

Some aspects of student social life may also be impacted. According to Pechicken, “gamers living on campus will no longer be able to blame unreliable ping times to justify why their sorry asses can’t get out of Bronze in Valorant.” Furthermore, nightly skeet shooting off of the roof of Geisel will be suspended until fall quarter of 2023 while ITS tries out different methods of protecting the birds from students and each other. Those methods will include body armor, miniaturized missile defense systems, and regularly injecting the birds with steroids.

Critics of the initiative cite statistics that show that carrier pigeons “drop one in 10 notes that they are tasked with carrying.” James E. Thernet, an outspoken critic of the plan, proposed an alternative, encouraging the university to instead “construct a network of tunnels beneath the university and have an army of rats carry the messages.” Thernet said that “not only would they be more reliable than pigeons, but the tunnels would allow the rats to provide connectivity to the Ethernet ports in campus facilities — a feature that was lost several years ago.” In response, Pechicken stated, “Rats carry the risk of spreading viruses, both human and computer.”

As a demonstration of the pigeons’ ample bandwidth, at the beginning of the spring quarter, every student living on campus will be required to simultaneously join a Zoom information session and download the quarter’s textbooks from Libgen. Training for the pigeons is currently ongoing.