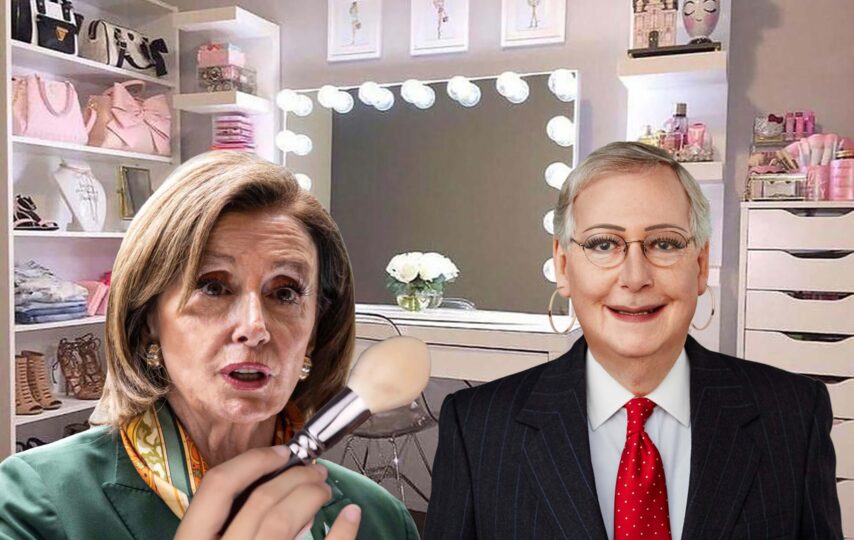 House Speaker Nancy Pelosi and Senate Minority Leader Mitch McConnell announced that Congress will be releasing a bipartisan, sustainable, and lactose-free skincare line in the first episode of The Ellen Show’s final season. The line is part of a unity initiative from Congress in light of the almost evenly split midterm election results. McConnell told Ellen DeGeneres, “Nancy and I don’t have much in common except for our passion for making sure that our constituents can wake up every morning feeling Divine, United, Magnificent, and Beautiful.” “DUMB, for short,” Pelosi added. “With the current hyperpolarized political climate, we believe that consumerism is the only thing that can bring together all Americans from both sides of the aisle, so we’re excited to be putting DUMB products in T.J.Maxx stores all across America.”

Leonardo DiCaprio, DUMB’s celebrity spokesperson, praised the brand’s sustainability initiatives in his recent Oscar acceptance speech. “What Congress has done with DUMB has really inspired me to take stock of my own life and think about the changes I can make to help California’s drought. That’s why right here, right now, I’m committing to only taking five-minute showers and to doing a rain dance every night before I go to sleep, and I encourage you all to do the same.”

DiCaprio also explained that once customers are finished with their DUMB products, they can recycle the packaging in a specialized facility located under the Denver International Airport for only $50. “That’s a small price to pay to save the planet,” said The Revenant’s star. For those far from Denver, he says that the safest and most eco-friendly way that consumers can discard their products is by throwing them directly into the ocean. “I recently learned about these things called microplastics that can be harmful to the environment. Our products, though, are made entirely of macroplastics that are totally safe. When our containers are in the ocean, animals can see them and just swim away! Surely, no animal has ever been stupid enough to die because of a large piece of plastic.” When asked about whether the packaging is made out of recycled materials, DiCaprio’s representatives declined to comment, citing poor cell service on their private jet.

Although DUMB was intended to unite the country, reception has been mixed; some argue that Congress should have left skincare to the professionals. In a livestream, unlicensed “dermatologist” Sara Vee said, “I don’t think you guys should trust Bernie Sanders with skincare advice. I mean, look at those wrinkles! I know he’s gotta be at least 30 years old, but some sunscreen or entry-level plastic surgery would really go a long way.”

Environmental activists have also said that the recommended disposal methods are not actually safe for the planet. Dr. Graham Stomouls, a professor of environmental chemistry at UC Berkeley, explained, “Plastic is made out of dangerous chemicals like sodium and chloride that have no place in our oceans. This is a very slippery slope. Once we start dumping chemicals into the sea, what’s next? Hydrogen and oxygen in our drinking water?”

Across the pond, Great Britain has taken an example from the U.S., as British officials have been looking to unite the country after Liz Truss’ brief tenure as Prime Minister of the U.K. An overwhelming majority of the British Parliament voted to make orthodontic care free for all citizens, a move that has caused Rishi Sunak to be hailed as the “father of British dentistry.”