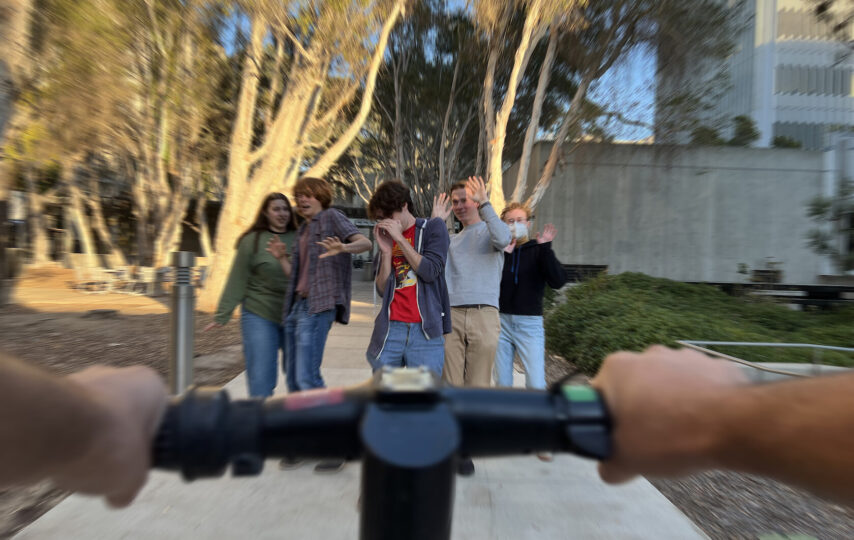 “My philosophy professor asked me what I would do when faced with the trolley problem,” said one SPIN user. “Today I found out.”
Photo by Julia Wong

On Thursday afternoon, the pedestrian versus cyclist debate experienced renewed controversy after a SPIN scooter incident claimed the life of UC San Diego student Matteo Joseph. In the wake of this tragic incident, the school’s student body split into two sides. One side deemed themselves the Freedom Walkers, pedestrian students who insist they can walk anywhere they please. The opposite side, dubbed the Corrective Cyclists, consists of micromobility device users who insist the campus is rightfully theirs.

“It’s ridiculous,” said Mylee Rosas, self-proclaimed leader of the Freedom Walkers. “The $11,867.42 that I pay every quarter should let me walk wherever I want! If that place happens to be the bike lane, so be it! Cyclists have eyes; they should’ve seen Matteo coming from a mile away.”

The leader of the Corrective Cyclists, Angelica Waters, stated that their true intention was not to antagonize pedestrians, but to simply get to class. “Matteo was wearing two sets of headphones, texting on his phone, and zig-zagging in the bike lane. Of course he was going to be hit! We cyclists have places to be, and if he was in our territory, it’s as simple as that.” Waters added, “Besides, if cyclists aren’t strong enough to run down a fellow UCSD student, they deserve to get their U-lock cut and their bike stolen during their next lecture at Warren. Cycling isn’t for the weak.”

Tamika Wilder, Joseph’s roommate and friend, stated she was completely on the side of the Freedom Walkers. “You wanna know the truth? Matteo isn’t even dead,” Wilder revealed. “We just used some theater department props and a whole lot of acting drama. He’s alive and in hiding, but we needed some drastic measures to take back our walkways. And it’s working! In only a few short weeks, the cyclists will no longer be an issue.”
In response to the controversy, the UCSD Transportation department has shut down all walkways where pedestrians and cyclists have the potential to meet. “It’s a cooldown measure,” said Nathaniel Shepard, one of the department officers. “It’s like making sure two wild animals can’t see each other. Once they stop contact, the tensions will die down … in the meantime, if you use code MATTEO at the Campus Bike & Skate shop, you can get 10% off a helmet! Get that deal while you can.”

As pathways shut down around campus, students raised concerns about 10-minute walking commutes now being extended to over hour-long walks. However, Shepard stated that he is “not worried” about this development. “Those pathways mean nothing anyway. Do you know how we even created them to begin with? I gave my two-year-old daughter a map of UCSD and a crayon and let her draw paths wherever she saw fit.”

The heated debate is expected to continue for another two weeks, or “until finals kill the remaining determination” on both sides of students. Both sides continue to petition against each other on Library Walk as the current student body learns to navigate a newly reformed campus and its detour routes. As a final precautionary measure, SPIN ambassadors have removed all scooters from campus. They stated it was a way to quell the rivalry and ensure the students’ safety now that the scooters “have a taste for blood.”