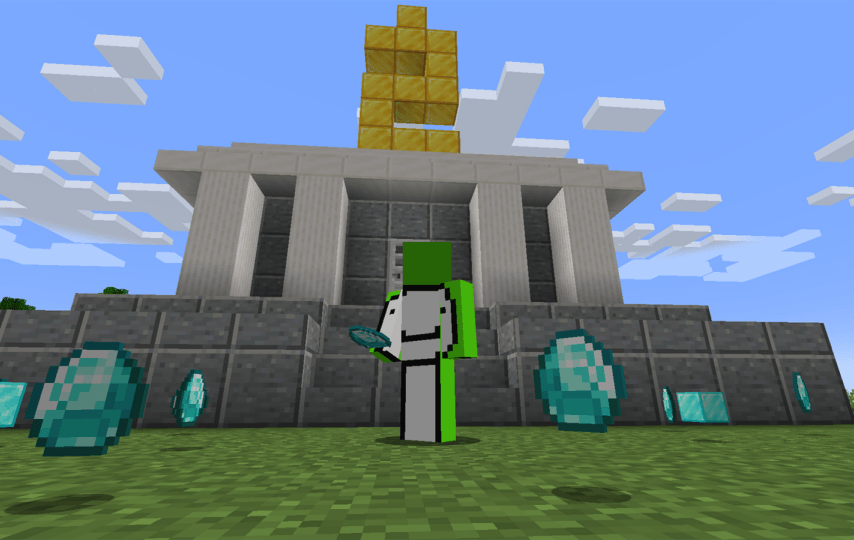 This past week, the newly-elected president of L’manburg announced to his constituents that he would be doing a “face reveal” following the conclusion of his campaign. The president, known only by his last name Dreám, was elected into office last September, despite having never once shown his face to the public.

The country of L’manburg, a small, hidden country located off the coast of Nebraska, recently gave Dreám a 100% approval rating based on his “charming and mysterious personality.” One proud resident of L’manburg stated, “Dreám is perfect for our country! He’s cute, funny, sexy, and smart. He’s going to bring L’manburg out of the Dark Ages with his good looks alone!” In fact, most citizens were indifferent to his policies and accomplishments, stating, “His anonymity is what makes him attractive. That’s how he got everyone’s vote. Not because of his policies or whatever.”

One teen from a small emerald-mining village commented, “I couldn’t care less about politics. To be honest, I have no idea what he even stands for, but what I do know is that he’s the nicest, funniest guy and probably gives the bestest cuddly snugglies. Purrrr.” Dreám first gained popularity a few years back by making online content, when people became “obsessed with his incredibly deep, raspy voice.” He went viral after he posted a few pictures of himself online, keeping his face hidden and instead showing his “chiseled abs, sculpted obliques, and curly blonde hair.” When Dreám’s haters, nicknamed “the Insomniacs,” asked Dreám what he was going to do to improve the country’s unemployment problem, Dreám responded with a faceless selfie and the caption “Does this answer your question?”

After the first week of his presidency, Dreám finally held a rally to reveal his face to the citizens of his country. He stepped out from behind the curtain, wearing his own merchandise and a brown paper bag over his head. He screamed into the microphone, “Are you ready, my kittens?!” before slowly removing the bag from his head. Silence came over the audience. Someone screamed from the crowd, “He looks average! BOOO!” and others quickly joined in. One audience member complained, “I think I speak for everyone when I say his average looks deeply disturbed us. We all had an image in our heads that he would be our dream man. But then Dreám turned out to not be our dream. Woah, that is so deep.”

Following this event, Dreám’s approval rating plummeted to 0%. Memes quickly surfaced on social media involving users comparing his face to “a slice of unseasoned meatloaf.” Dreám used his presidential power to suppress the media, banning all social apps and instead endorsing his own program, “Dreám Social,” where the only rule is that users “must comment nice things about [Dreám].” Dreám’s manager, Football Sam, commented, “President Dreám’s app had 200,000 downloads on the first day alone. Yup, that’s right, not only is he the best president in the world, he’s also a tech genius,” after being subtly handed a 64-diamond bill. Despite Football Sam’s claims, only two posts have been made on Dreám Social, and both of them are from Dreám himself. President Dreám stated that his next big step for L’manburg is to “legalize sleep,” so that citizens can always dream.