POINT: You’re Making Me Uncomfortable With How Frequently You Write Fanfictions

Josh, we need to talk. I know that you’re enjoying your … “creative writing” and I know that it’s making you happy, but at a certain point you need to step back and realize how it’s affecting the people around you.

I know you’re making money on the internet by filling requests for people. It’s great that you’re expanding your portfolio for when you find a real job, but you need to stop writing these … “weird” stories.

Honestly, it was almost okay when you were just writing stories about how you and Mario went to the store and bought bagels — it was a little weird, but I was okay with it. But then you started writing stories about Naruto and Rick Ord 69-ing while code was compiling, and I don’t know how I can look you in the eye after that.

Please, Josh. Stop this. Stop before this gets too personal and invasive.

Tim met the newspaper’s gaze as he gently caressed its drop caps. The paper fluttered away in a whirlwind of emotion.

“Baka,” the newspaper muttered. How dare Tim lift up its skirt like that. Tim’s eyes subconsciously dropped down towards its corners. All the times he had watched this newspaper from afar as it was handed out on Library Walk. His chest hurt at the thought of anyone holding the paper but him.

The newspaper crinkled as it folded its edges away from Tim’s gaze. Its grey surface blushed red as it stuttered, “I cannot, not until the 4,000th copy gets handed out.”

The newspaper wanted to open up, but it couldn’t. It physically couldn’t make itself, as if it were being held shut by strong invisible hands. How could it tell Tim how it feels without sounding like it was turning Tim down? All these emotions muddied within the newspaper, and it couldn’t look Tim in the eye. Tim sensed the newspaper crinkle.

“It’s okay,” Tim said, a tinge of panic in his voice. “We don’t have to do anything you’re not comfortable with.” He removed his hand from it before he touched its page number.

This newsflash made the newspaper’s news flush. Maybe Tim could be the one to unfold its centerspread after all. 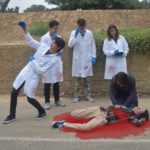 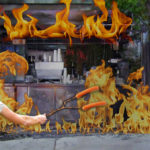